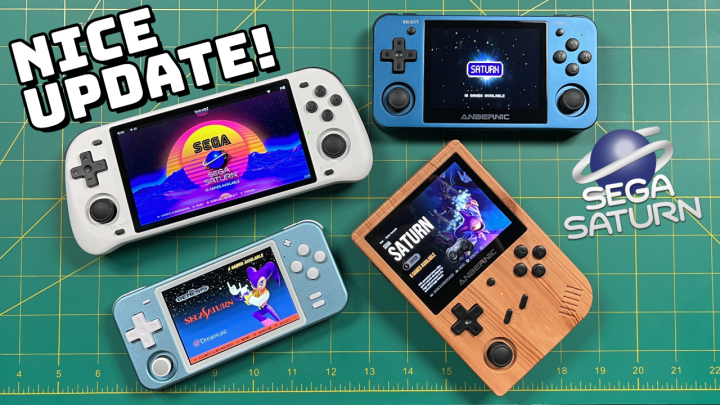 Thanks to new updates to their emulators, you can get greatly improved Sega Saturn performance on RG351V, RG351MP, RGB10, ODROID Go Advance, ODROID Go Super, and RGB10 Max devices running ArkOS and RetroOZ. In this guide I’ll show you how to install the new update, configure the emulator, and we’ll take a look at some gameplay, too.

Note that 351ELEC support is planned but not implemented yet.

Update to the latest versions of ArkOS or RetroOZ

For now, only ArkOS and RetroOZ have official releases with the new standalone Yabasanshiro emulator. So if you want to play on one of these devices, you will need to be running this custom firmware.

ArkOS: To install ArkOS, head over to their main page, read through the information, and then find the download links at the bottom of the page. After installing ArkOS, you will need to run its built-in Update tool to update to the most recent version.

RetroOZ: To install RetroOZ, check out my RGB10 Max Starter Guide. Once you have it installed, update to to the 26JAN or later Version 0.52b by heading over to their ODROID forum post and grabbing the file (here is a direct link to the 26JAN update file). Once you have downloaded the zip file, extract its contents and place the two files into the “ports” folder of your device’s SD card. Here are the two files you should place directly in the ports folder:

Finally, head to the Ports section on your device and run the Update script (named “Update-WIP-0.52”). Once complete, the update files will delete themselves, leaving you with a nice and shiny new version of RetroOZ.

Note that if you are using EmuELEC, the standalone emulator is available in its current test release. So this will be possible on devices like the ODROID Go Advance, ODROID Go Super, Chi GameForce, or an Android TV box loaded with EmuELEC.

To start, I would recommend using Saturn BIOS files for wider compatibility. The file is called saturn_bios.bin and you are on your own to find them. Place them in the “bios” folder of your ArkOS or RetroOZ SD card.

In terms of Saturn game files, I recommend using CHD files, which are compressed to save space, and boot easily.

Here is a preliminary list that have been tested by me or members of the retro handheld community (thanks Baco) and have found to be at least playable (if not full speed). If you test any other games and want me to add them to the list, leave it in a comment below.

Here is a video featuring the grips I used with the RG351MP in the video above:

One thought on “Sega Saturn Update for ArkOS and RetroOZ”