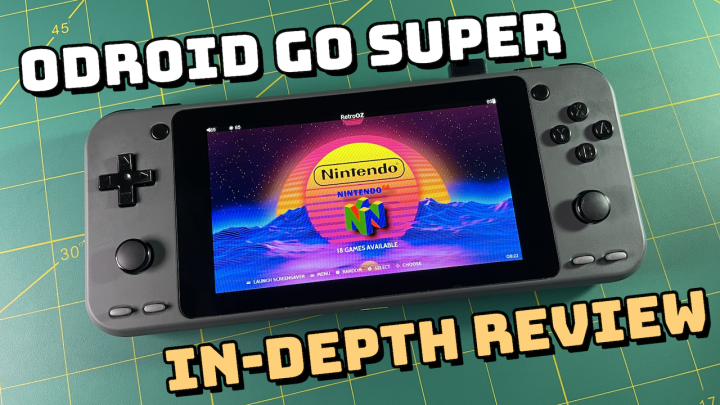 I’ve had a month with the ODROID Go Super, and I’m torn between loving and hating this device. There are moments when it is purely awesome, and others when I’d rather use a different handheld device. So check out my video below where I do a deep-dive into all the things I like and dislike about the device.

Firmwares demonstrated in the video

There are several different firmwares available for this device, and I will do a dedicated firmware video soon. For now, here are the firmwares I demonstrated in the review video above:

Notes on the screen

The OGS has a 5″ screen with an 854×480 resolution. These dimensions make this screen effectively a 16:9 display (actually, just a hair wider than 16:9). This can be troubling since the ideal aspect ratio for retro gaming is generally considered 4:3. The original OGA (and by extension, the RG351, RGB10/RGB20, and RK2020 devices, among other clones) had a 3:2 aspect ratio. Moving to a 16:9 display is great for PSP games, but no other emulated systems — if you want to use fullscreen for any other game system, the display will look extremely stretched. Now, native ports and game streaming are awesome on this thing, so it’s a tradeoff.

Another thing to consider is that despite being a 5″ display, this will not result in a more impressive screen to the eyes. With these specs, the OGS has a ppi (pixel per inch) density of 195.93. That’s not too bad, considering the 164.83 ppi density on the OGA, RG351, and RGB10 devices. So it will look better than those devices. But compared to the PS Vita’s 5″ screen (960×544, or 220.68 ppi density), it looks less sharp. Heck, it significantly worse looking than the RG350M’s 3.5″ 640×480 display, which packs an impressive 228.57 ppi density. In real life, however, the screen appears crisp and vibrant, with warm, saturated colors that remind me of the PS Vita 1000 OLED display.

As you can see, a 4:3 display (red box) will look very small on the device when you factor in the pillarboxing (i.e. the opposite of letterboxing) on the sides. On their forum, ODROID mentioned that they would have preferred to ship the device with a 4:3 screen, but weren’t able to find one. So there is a LOT of device for that much playable screen with 4:3 native games. This may or may not be a dealbreaker for you.